Transition of stress fibers to CLANS 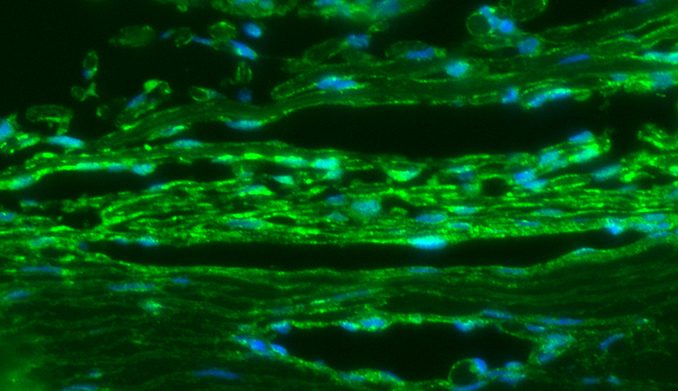 POAG is an age-related disease in which there is a buildup of resistance to the movement of aqueous humor through the trabecular meshwork (TM), causing an increase in intraocular pressure and subsequent degeneration of the optic nerve. The restriction in movement is attributed to an increase in the deposition of the extracellular matrix (ECM) thus blocking fluid movement and changes in the cytoskeleton network that controls the contractile forces needed for fluid movement. Central to both these processes are signaling events mediated by a family of receptors called integrins.

The Peters’ Laboratory has shown that alterations in the activity of a specific integrin call αvβ3 integrin causes both the increase in the deposition of the ECM and changes in the contractile properties of TM cells often associated with glaucoma (Filla rev). Our studies show that upregulation of the β3 integrin subunit involved a calcineurin-NFAT pathway {Faralli, 2015 ref} and appears to be part of the secondary glucocorticoid (GC) response associated with GC-induced glaucoma {Faralli, 2013. In addition, we have found that there is a compensatory mechanism that prevents the elevation in IOP caused by GCs which could explain why some people do not develop glaucoma.

The lab is currently looking for the co-factors and components of the calcineurin-NFAT pathway that may be responsible for the increased activity of αvβ3 integrin signaling in glaucoma. In addition, we are all looking for the downstream effectors of αvβ3 integrin that specifically control the deposition of the ECM and the contractile properties of the cell. Understanding how αvβ3 integrin regulates these processes is important because it could provide new targets to restore homeostasis and decrease IOP.